The Kinothek Asta Nielsen was founded by a group of women cinema-lovers: women film curators, film historians and theorists, film critics and students, and cinema goers. These women regard the objective of the Kinothek as being to make what does not fit into current cinema practice accessible again to non-specialists and in cinemas. Film history is particularly inaccessible, having been left to archivists, restorers, scholars or to the special event.

The whole diversity of which cinema is capable, but which has become submerged in everyday entertainment and information, can be made visible again in corridors cut by projectors showing the whole wealth of film history: Super-8 amateur films, B-pictures and experimental films – those "philosophers of the senses".

Between collecting and screening

The Kinothek Asta Nielsen aims to make film history by way of film programmes. In doing so it will take up some of the loose threads left by the theoretical and practical film work of the more recent women's movement, the intention being to pull that work back from oblivion. The Kinothek Asta Nielsen will ensure that copies are accessible. It will itself collect films in the non-commercial 16 mm and Super-8 formats, plus written material, catalogues, flyers, the so called grey literature, in addition to relevant publications. Both in its collecting activities and its film screenings, the Kinothek will orient its work around concrete projects: film series on specific themes, events related to film history and film theory, and interdisciplinary research projects.

The acting of Asta Nielsen – a star of early cinema – taught this kind of history lesson: she used the camera as a tool for translating a history that could not be separated from the body, and she made that history accessible through the experience of the film. The work of Asta Nielsen is the cinematographic constellation under which the Kinothek was born. 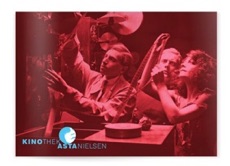